I’m a big believer in making everything from scratch as often as possible. I also believe emergency food can save your day, which is why I always keep jar marinara in my cupboard but I always, ALWAYS prefer to make my own if the time is available. I’ve been making fresh marinara so much lately I have almost completely lost my taste for anything out of a jar. This recipe is simple, delicious and can be prepared quickly, leaving you time to toss a salad, boil pasta, or prepare anything else for your dinner. By the time all that is ready you will have piping hot homemade marinara awaiting you. This recipe can easily be halved but I prefer making a large pot of it to avoid having to dig into my emergency food stash later in the week.

1. Warm olive oil in a large dutch oven at medium high heat. Add onions and cook until translucent. Add garlic and stir for 2 minutes.
2. Add wine and let cook for 3-5 minutes.
3. Add crushed tomatoes and tomato paste. Bring to a light boil and then simmer.
4. Cook for a minimum of 30-45 minutes. Toward the end of cooking add salt, basil and red pepper flakes, if using.
5. Serve over pasta, polenta, pizza or use as a dipping sauce.

A savory gravy can pull together a simple meal and transform it into a taste explosion worthy of licking the plate. Whenever I don’t feel like cooking, I usually make nutritional yeast tofu and/or mashed potatoes. These simple creations were begging for a savory topping but making gravy can be time consuming and it doesn’t seem worth it for a single person meal. Enter this miso gravy. Though I love a gravy with fresh onions and garlic, I decided to create this one with a prominent miso flavor that I can whip up easily with ingredients I always have on hand. Make sure you add the miso after the the gravy is no longer boiling so you don’t destroy the nutritional benefits.

1. Heat Earth Balance in a medium saucepan over medium heat
2. Add flour and stir constantly until fully dissolved
3. Add rice milk and continue stirring until gravy thickens
4. Reduce heat to low and add nutritional yeast, stirring constantly
5. Add miso and rest of ingredients and continue to stir
6. If gravy is not thick enough, add some arrowroot powder and remove from heat
7. Serve immediately

Once upon a time when I lived in Boulder, Colorado, I used to live across the street from the local vegan shop named Three Little Figs, owned by two lovely ladies. I was addicted to their ranch and was sad when not only did I move but they also closed. The owner agreed to give me the recipe and swore me to secrecy. She felt safe that I would be living all the way in Portland and couldn’t possibly betray her recipe. Little did she know that someday I’d have a blog. Out of respect for her, however, I will only post the ingredients I used and not actual amounts. I did alter the recipe , naturally, so this is mostly an homage to the original.

Blend all ingredients together in a food processor. Refrigerate before serving.

I recently attended a potluck with an ‘un-chicken’ theme, in anti-honor of National Chicken Month. Everybody made fantastic dishes such as chicken salad, chicken and broccoli bake, chicken and corn chowder, and chicken croquettes, to name a few. The versatility, originality and tastiness of the dishes presented a hell of case for giving up our innocent fowl friends. As The Spicy Vegan, I naturally had to bring a spicy chicken dish. What’s better than spicy Buffalo wings? Nothing. 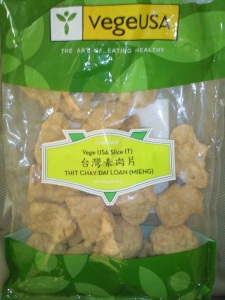 The idea was presented to me by the hostess Janessa, The Epicurious Vegan, and I welcomed the challenge to create one of my favorite dishes from my pre-vegetarian days, one that I missed for its delicious spicy sauce. The first challenge was figuring out what to use as a base. I went to our local Asian Market, Fubonn, and bought VegeUsa dehydrated soy protein nuggets from Taiwan. The trick to using these is getting rid of the cardboard taste. I decided to hydrate mine in vegetable stock instead of water. Next step was creating the Buffalo wing sauce. I didn’t measure anything, so you will have to adjust according to personal taste

I did a roughly one to one ratio of hot sauce and earth balance, followed by a healthy dash of worcestershire sauce and a heavy handed sprinkle of cayenne and paprika. I simply put all ingredients in a sauce pan and simmered them together until well incorporated. Next, I tossed my newly dehydrated wings in the sauce and marinated overnight. In the morning, I baked the marinated nuggets at 400 degrees for about 15 minutes. Then I took them out of the oven, tossed them again and baked for another 15 minutes. Once I arrived at the potluck I tossed them again and baked for another 15 minutes. You can repeat this step endlessly as it will only continue to seal in the flavor.  The final step was tossing them one last time but leaving them slightly saucy. Serve with your favorite dressing (I used a homemade ranch– recipe to follow), carrot and celery sticks and voila! You are now ready to blow some minds.

I came up with this spicy spread to add a kick to my TLT sandwich (recipe to follow). I’m working on making my own chipotle sauce but in the meantime the canned variety will work. Once I crack the code on a homemade chipotle sauce, I’ll post it and update this recipe. I make this dressing in large batches so I can use it in a variety of sandwiches, especially the TLT and veggie burgers. If you have other suggestions for uses, let me know!

Lover of all things vegan for the animals, for the planet, for my health and for the love of delicious plant-based food.